Four students who attended Dr. Challoner’s Grammar School wrote a lovely bridge related letter thanking Nigel Thompson and Tony Aston who excellently run the bridge club at the school. Many thanks to the four junior bridge wordsmiths: Josh Robey, Zach Yarrow, Louis Southwell, Freddie McCallum who have since left school and gone on to attend different universities around the country. We really hope to see them on the bridge table in the future! 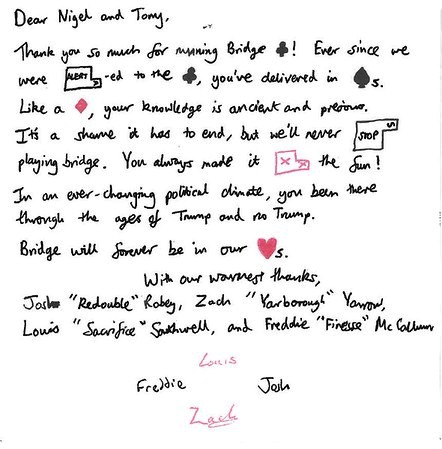 Thank you so much for running Bridge

! Ever since we were “Alert”-ed to the

, your knowledge is ancient and precious. It’s a shame it has to end, but we’ll never stop playing bridge. You always made it “double” the fun! In an ever changing political climate, you been there through the ages of Trump and no Trump.
Bridge will forever be in our

Interested in learning bridge or having your children do so? By...

23rd March 2020
X
We use cookies to ensure that we give you the best experience on our website. If you continue to use this site we will assume that you are happy with it.Ok