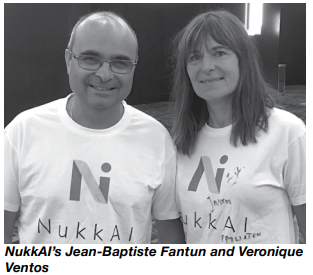 The advances in artificial intelligence (AI) for games such as chess and go have been dramatic, so much so that only the best players in the world have any chance against computer programs such as Google’s Alpha Zero. But bridge remains a challenge for AI developers, with mediocre bridgeplaying “bots” being largely unchanged for many years.

Jean-Baptiste Fantun and Veronique Ventos are hoping to change that. They are the cofounders of NukkAI, a private AI lab based in Paris, whose scientific objective is to build a program that can outperform human experts and – key point – explain its decisions. Ultimately, Fantun and Ventos believe their work can be used for other áreas.

“The innovative methods we develop are likely to have an impact on different fields: healthcare, agronomy, insurance, etc.,” she said. According to Fantun, the NukkAI project has two “legs”:

“One leg is dedicated to research focused on bridge, and it has taken a huge step in just one year. Starting in May 2018, we have NukkAI’s Jean-Baptiste Fantun and Veronique Ventos already gathered a strong team of prominent AI researchers, young engineers and bridge experts and are moving fast on research (bridge robots).

“The other leg is dedicated to applications, but taking a step with this leg required a credible scientific team which we now have gathered, thanks to the bridge challenge. So now we are ready to tackle different verticals with an incremental approach: We develop proofs of concept with different business partners, which will give us an idea of the potential market for NukkAI while generating revenue.”

Fantun and Ventos are in Las Vegas (with their children, who are members of the French under-26 bridge team) to meet potential investors. They’re also meeting with bridge experts to show them the improvements of their bots and bridge-related apps and in return, gather their recommendations. Ventos said that they are moving fast on two fronts.

“First, the level of our bridge bots: Our innovative algorithms are already beating state-ofthe-art bridge bots and in some areas of the game, we are approaching human level. “Second, the explainability aspect: We have already realized proofs of concept where we ‘open the black box,’ i.e., our bots take an optimal decision, and we can plug in a module that ‘explains’ the rationale for the decision.”

The couple said that they have plans to use their research for other areas.

“The first project that we are launching is in the humanitarian field: It will be a joint project with IMMAP, a U.S.-French non-govermental organization that gathers data for humanitarian purposes. It is likely to have a strong impact and may lead to further substantial projects with regard to the ‘AI for good’ momentum.”

2018 Nordic Junior U16 Championships and Junior Camp by Micke Melander

4th April 2018
X
We use cookies to ensure that we give you the best experience on our website. If you continue to use this site we will assume that you are happy with it.Ok