Alan Sontag was for many years one of the finest Open players in the world. Now concentrating on the Seniors, at least at world championship level, he showed on this deal from the quarter-finals of the d’Orsi Trophy that he is still as sharp as he ever was when at the helm in a tricky contract. 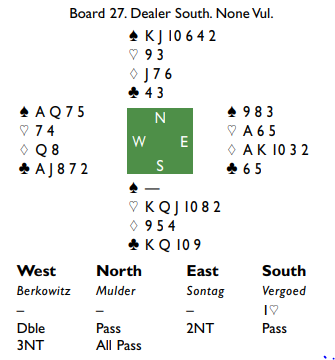 Hans Vergoed, of the Netherlands, led the king of hearts, which Sontag ducked. He also ducked the continuation of the

Q but won the third round of the suit, throwing a club from dummy, while Andre Mulder pitched an encouraging

Sontag led the eight of spades and Vergoed had to find a discard. The Dutch pair were playing reverse signals, and he did not wish to pitch the nine of diamonds in case Mulder held, for example, king-ten doubleton. He therefore discarded the

Of course, this should not matter because South should have made his suit-preference signal with his choice of heart to lead to trick three. Sontag ducked the spade in dummy, so Mulder won the ten and, not reading the position, led the jack of diamonds.

Sontag won the queen and rattled off all five diamond winners. Vergoed, South, was under no pressure, but what was Mulder to keep when dummy came down to

If he kept two cards in each black suit, Sontag would play ace and another spade and win the last two tricks with the

So Mulder came down to three spades and one club. But that was no good either. Sontag cashed the ace of clubs then led the seven of spades from the

AQ7, and Mulder won the jack but then had to lead into the ace-queen to give the contract. There was no escape.

When trumps Break Wrong side suits may be used as “additional...