On the first Saturday of the new bridge year, Julebukken, which is Sortland Bridgeklubb’s traditional federal tournament, went off the stack with 24 pairs on the starting line. Among the participants were four junior players, and the youngest of these should really prove their mark on the tournament.

Nicolai Heiberg-Evenstad (turns 12 later this month) went to the top with his dad Stian André Evenstad. After being in the lead for most of the tournament they finally took a fairly clear victory with the solid score 63.06%. Frank Ivar Falsen and Jonny Reinholdtsen provided double wins to Sørreisa Bridgeklubb, while Olav Ellingsen and Svein Robert Vestå from the organizers club took the last pallet place.

There are no official statistics showing young winners of federal tournaments over time, but there can hardly be any doubt that Nicolai must be one of the youngest to ever win such a tournament.

We will take a closer look at a game that appeared already in the second round. Nicolai played accurately against 2 saves without being paid for that reason: 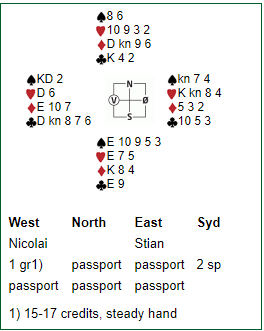 As we can see, Nicolai chose to raise his hand in the West to a 15-17 grand. Everyone probably does not agree with that assessment as the quality is not the very best on either the club suit or the side values. But it is a well-known phenomenon that junior players are not modest in bidding.
Nicolai played the club lady. The declarer won with the ace on his hand. Declarer continued with the spade ace and a spade. Nicolai came in with the lady, he also cashed the king in spades before continuing with the jack club.
The trick was for the table’s King of Club, and declarer continued with a diamond to the King. If Nicolai takes with the ace the first round, there will be nine tricks for declarer because a heart loser disappear in the fourth diamond.
Nicolai, however, followed closely at the hand distribution thanks to his father’s discards. His father had indicated an odd number (three or five cards in the color). The player was unlikely to have a single diamond. Since he was marked with exact 5-card spade and doubleton club, he would then have had 5-card hearts. Then he would have shown both majors over 1NT instead of only 2 spades…
Thus, it is fairly certain that both partner and declarer had three diamonds each, and this was the reason to play low and not let declarer to get full use of the diamonds.
After the diamond king was allowed to keep, the player continued with a new diamond, which also won. In the next diamond, Nicolai, won with the ace before playing another club. Declarer trumped and played a heart to the table. Nicolai jumped up with the queen and once again he played a club. Declarer could trump and played the heart ace, before Stian finally could won the heart´s king.
110 to North-South gave -4 (-11 was bottom) for the winning pair. At a good number of tables, East-West played NT contracts, giving only a 100 score to North-South. In addition, a diamond contract with eight tricks was played at a couple of tables, giving only 90 to North-South. A difference of 10 or 20 in scores can fluctuate many points when playing a tournament, while having minimal value if the form of the tournament is team match.
Although there was a poor score for Nicolai and Stian on the game in question, Nicolai saved some points by holding the contract to eight tricks. If the declarer would have got nine instead, the score would have been -8.
There may not have been any witchcraft but this is nevertheless an instructive example that shows how far one can get by following the mate’s signals. In many games, this type of signal is crucial for the opponents to be able to keep the player down to a minimum number of tricks.
By Kristian Barstad Ellingsen

Never Finesse Against Your Partner by Schmuel Lev