The Lavazza-Chagas match was dramatic until the last board. Finally Lavazza won by 6 IMPs on his rival and paved his way to the semifinals. At one of the tables the Italian team was represented by Bilde-Duboin in North-South while the Chagas team sat Thoma in West and Ravenna in East.

Board 24 saw an excellent defense developed by Ravenna that managed to deceive the declarer to lose a cold contract. 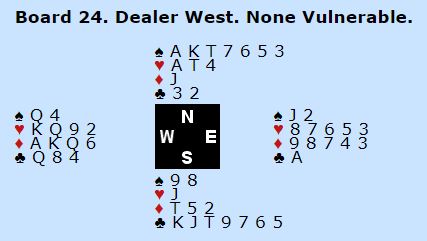 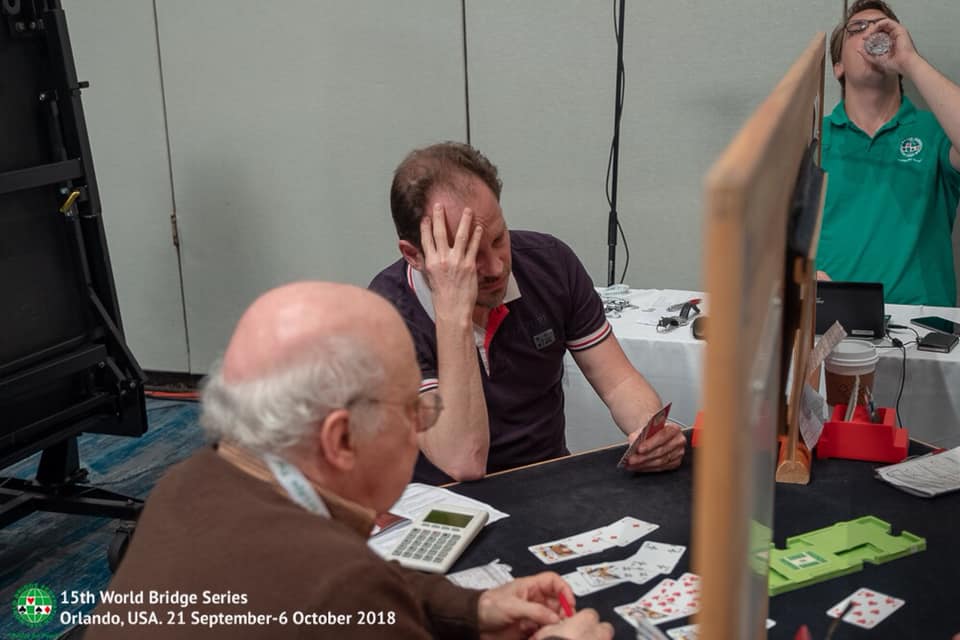 After winning the first trick, Ravenna decided to continue with a trump to stop Bilde’s possible heart ruffs. Watching

2, so declarer could not develop an entry to the table with the

Q and the declarer won with his trump ace.

These were the BBO comments at this point:

CopeyJ: has to be a precise defence,

A lead, diamond to partner,

back ruffed and a trump shift I think, in fact even that isn’t enough as declarer can win, ruff a

K, adding up to ten tricks. So this looks like 590 – but could easily be duplicated.

CopeyJ: sorry 9 to Lavazza, who will lead by 8

right now is the most elegant solution, but…

CopeyJ: It’s true – easy from up here…and I have been precipitous. Bilde has a real problem now…

And Bilde continued with a club… Ravenna throwed a heart (

8, very fast). He was still thinking in denying declarer the

These was the commentators reaction to Ravenna’s discard:

9 would have been an entry

Bilde at this point in time, thinking Thoma had all the trumps…played another club …and after this move he couldnt win the hand…

Q, Bilde ruffed with the

7 and Ravenna discarded another heart!!!. Declarer continued with

A, ruffed a heart in dummy, and played a club, Thoma ruffed with his

4, and Bilde threw his last heart loser, no play would have changed history at this moment, it was an imposible to stop trump promotion. Ravenna played his last heart too.

K, Bilde ruffed with the

6, but Ravenna now over-ruffed for one down and a world-class defense…

The Crocodile Coup by Fernando Lema

The Case of the Disappearing Trump Trick by Beverly Kraft –...

8th March 2018
X
We use cookies to ensure that we give you the best experience on our website. If you continue to use this site we will assume that you are happy with it.Ok