The technique of the cross-ruff is not very difficult. The problem as to whether or not to play for a cross-ruff is sometimes harder to solve. Declarer may have the further choice of setting up a side suit in dummy and the selection of the better line of play involves the use of sound judgment rather than the application of fixed rules. One thing is certain. Before embarking on the cross-ruff voyage the player should be able to count in high cards and ruffs the number of tricks required to fulfill contract, always bearing in mind that if the lead is ever relinquished the opponents will no doubt lead trumps in an attempt to spoil the party. 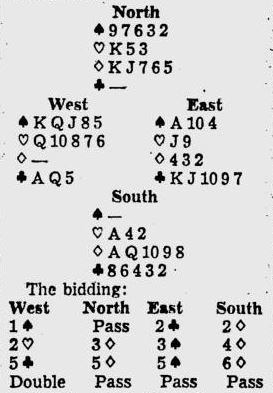 In today’s hand, South became the declarer at a contract of six diamonds doubled which he failed to fulfill because he overlooked a fundamental principle of cross-ruff technique, which is the prompt cashing of high cards. The bidding was somewhat weird. No one seemed to have a clear idea of what was going on, and all appeared to be swept away in the bidding rhythm. South’s refusal to pass the five spade bid around to his partner, who might wish to apply the axe, was a gent of impropriety, but is not the point at issue.

The king of spades was opened and ruffed, then a club was ruffed in dummy, another spade in the closed hand. This thing went merrily on until the fourth round of spades at which pbint East discarded the nine of hearts. Declarer now awoke to the necessity of cashing heart tricks, but it was too late.

He was able to cash only one of them and East was able to ruff the other and return a trump. Declarer had been blessed with great fortune. All his trumps were high so that there was no danger of an over ruff. He could count five diamond tricks in each hand and the ace and king of hearts for a total of 12 tricks. But in cross-ruffing it is imperative to cash the high cards early in the play. The reason is that as you proceed on your criss-cross Adventure one of the adversaries is going to run out of the suit you are ruffing and will be at liberty to take discards. They will naturally discard the suit In which you have your high cards as in this case East discarded a heart.

To repeat: when cross-ruffing cash your high cards early.

Counting on Inference By Alan Caplan