Today in an increible swingy match Bulgaria got his ticket to the semifinals, breaking USA1 supremacy during almost all the match.

These are some boards from the last segment. The last set started with an advantage of 19 IMPs for USA1. 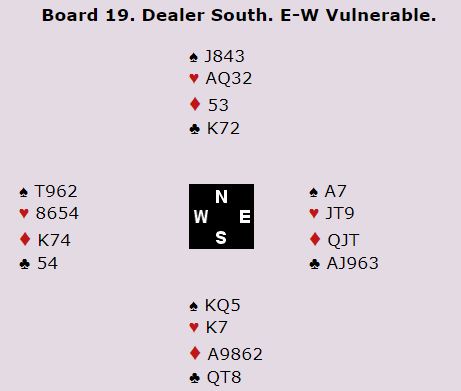 East won the lead with his

A, and switched to the

Q. When  he won the trick, continued with the

J , and afterwards continued with the

10. Now Nanev won with the ace, watching the fall of the

K over the table. Declarer played a small club to his king and claimed 11 tricks when East played his

After winning with his

10 the first trick, declarer switched to the

Q. East won with his ace, and after cashing the

A played a third club. Dummy’s king won the trick, and back came a diamond to the

Bulgaria added 8 Imps more in the next board, but lose 13 Imps in: 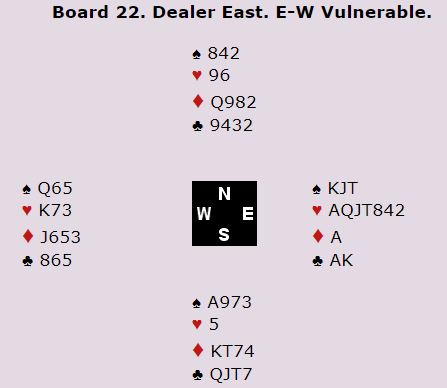 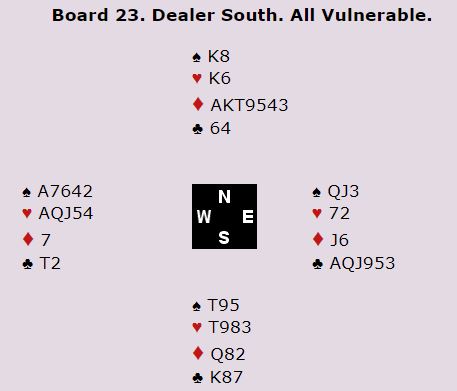 North won the first trick, and stop for a moment. He couldnt play almost anything. So he made a brilliant move he played his small heart. Rodwell after winning with the

J, played a spade. North was in again with the spade king, he played the diamond ace, declarer ruffed, cashed

J and continued with a heart to the queen…North’s king, and one down.

North also led the diamond king and won the trick, but he continued with a small diamond. Declarer ruffed and played a spade, North won with the king and chose to play the

K. This make life easy to declarer that after some rounds claimed +620. Bulgaria added another 12 IMPs.

Bulgaria added 10 IMps more in board 27 and tied the match. In the last five boards Bulgaria continued adding 13 IMPs more and won the match, and his ticket to the semi-finals.

Hoist by his own Petard by Zia Mahmood